The Egyptian population has long suffered from food security. It is estimated that 16 million people in live below the poverty line. In addition, 17% of the population suffers from food insecurity according to the UN World Food Programme. To tackle the issue of food security in Egypt by redistributing surplus food, Dr Moez El Shohdi founded the Egyptian Food Bank in 2006. Over a decade later, the network has succeeded in feeding over 12 million people, and based on United Nations' recommendation, the food bank model has been replicated to other counties to help achieve the UN Millennium Development Goals. 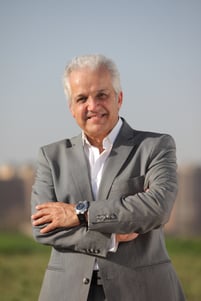 I am Dr Moez El Shohdi. For a living, I’m a businessman and President of various companies. But, as a second job, I am the Co-Founder and CEO of the Egyptian Food Bank and the Food Banking Regional Network - the umbrella of the 33 Food Banks founded in the region.

The Egyptian Food Bank was founded in 2006 with the bold objective of ending hunger in the country. Securing some meals to a limited number of families wasn't good enough for us. We wanted to make a difference, and to do so, we had six main goals:

By working towards these goals, we are now able to serve more than 12 million people in Egypt. Also, in 2010 we started partnering with organisations interested in implementing our business model in other countries in the Middle Eastern region. We are now helping 33 food banks in 30 countries in the area, and we are looking to expand to Africa, South Asia and Latin America.

We operate the Food Bank in a meticulous way, similar to the way that I manage my businesses. To give you an idea, all the NGOs that we work with have been previously investigated to verify their potential and credibility. This is very important to us. We want to make sure that we are helping people in need.

In Egypt, individual donors represent the most significant share of cash donations, followed by companies. Within all the sectors helping us, food and hospitality businesses are the ones donating the most.

Our work has already contributed to the creation of food waste regulations in France, Italy and Mexico. In the future, I hope that we can continue influencing other governments to take measures against the issue. Also, I am excited to continue expanding the food bank into different regions.

One of the most exciting food waste initiatives in Egypt happened years ago when we convinced the Ministry of Tourism to encourage hotels to reduce the size of the plates used in buffets. The plates went from 32 cm to 27 cm. In one hotel chain, this change urged people to put less food in their plates, which led to reducing by 25% the amount of surplus food that we were collecting from them.

The biggest challenge that we faced happened when we first started promoting our surplus food donation programme. In the beginning, it was challenging to make the media and the wider public understand that instead of collecting food that had been wasted, we were collecting surplus food that was 100% safe to eat.

However, with a lot of persistence, everyone ended up understanding our programme. It became our most successful and popular project, not only in Egypt but in all other countries we operate.

To help end hunger, food businesses can be more precise in order to avoid cooking too much food that will eventually end up in the bin. But, when they end up having surplus food, businesses should donate to food banks and NGOs that can safely deliver it to people in need.