We are delighted to announce that the team at Winnow has been awarded Tech Disruptor 2019 in The Circulars. Presented at the World Economic Forum, the prestigious awards recognises achievement in developing the circular economy. Previous winners have included IKEA, Nike and Patagonia. 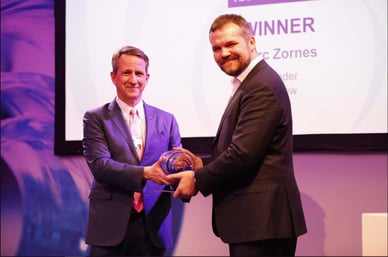 d the award at a ceremony hosted at the World Food Programme tent on 21st January. He said, “My team and I would like to salute the thousands of chefs around the world using Winnow to fight food waste. This award is recognition of their collective achievement, and we are proud that together we are saving over 23 million meals a year from the bin.”

He added, ”We believe that adoption of digital tools like Winnow will fast become the norm across the hospitality sector as the industry wakes up to the significant commercial and environmental benefits.”

In 2018 Project Drawdown, a comprehensive plan to reverse global warming, rated tackling food waste as the third most effective solution in the fight against climate change. Globally ⅓ of all food from farm to fork never gets eaten and if food waste were a country, it would be the third largest emitter of greenhouse gasses after the USA and China. Food waste costs the global economy around $1 Trillion in lost output, around 1.5% of global GDP.

The Circulars is an initiative of the World Economic Forum and the Forum of Young Global Leaders. It is widely regarded as the world’s premier circular economy award program. The award offers recognition to individuals and organizations across the globe that are making notable contributions to the circular economy in the private sector, public sector and society.

The circular economy is an alternative to a traditional linear economy (make, use, dispose) in which we keep resources in use for as long as possible, extract the maximum value from them whilst in use, then recover and regenerate products and materials at the end of each service life.