OzHarvest is Australia and New Zealand’s leading food rescue and food redistribution organization. Founded in 2004 by Ronni Kahn, OzHarvest collects surplus food from commercial organizations and redistributes them directly to more than 1000 charities including food banks. OzHarvest’s main goal is fresh food donations, they aim to collect and donate as much fresh food as possible. We had the pleasure to meet Ronni when Winnow joined forces with OzHarvest’s innovation arm, ForPurposeCo.

It is fair to say that Ronni is one of the global leaders in the fight against food waste. Principally, Ronni is helping to drive behaviour change and attitudes around the value of food. We were lucky enough to talk to her and learn more about her journey, inspirations, and challenges.

When I came to Australia with my two children, we had nothing. So, I spent a lot of time building my events management company to make enough money and provide for my family. There came a point where I had everything I wanted but I still didn't feel fulfilled. After all, you can only live in one room at a time and you can only drive one car at a time. This got me wondering about what else was I put on earth for? Ozharvest was the answers that I was looking for. 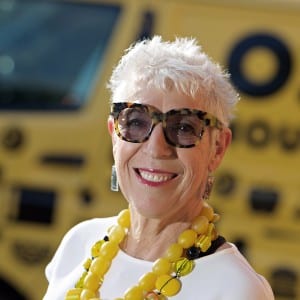 Food would always play an important role in the events that I used to organize. This is because food has the power to connect people. Food is about sharing. But, in every event, there was always more food than what was needed because it made my clients look generous. I had a problem seeing so much leftover food, so I started donating it to a charity that I knew.

From this experience, I had the idea to start OzHarvest. OzHarvest was founded on the assumption that good food should feed people who don’t have enough to eat. It took me a year to set up the business. As soon as our first vehicle was donated, we began distributing food to people in need.

When I first started OzHarvest in 2004, we were the only organization collecting perishable food to distribute to charities. Close to us, it was only the local food banks that that had existed for 10 years donating canned food. Through Ozharvest I wanted to create a free model. I wanted to take any food that was leftover for free and deliver it for free. This movement captured and still captures, the imagination of individuals and corporate.

Since the beginning, I saw the importance of providing good food to people who didn't have enough to eat. It is very powerful. Within time, I began learning about the negative effects that food waste had on the environment, and how much the issue was linked to what the organization was doing. I realized that Ozharvest was touching both issues: food insecurity and food waste. So, I joined both sides of our organization and started growing the movement and reaching more and more people.

We deliver food to all vulnerable people independent age and gender. To add to our work, we also launched the OzHarvest Market: Australia's first-ever rescued food supermarket, stocked with produce that has either been donated or would otherwise be thrown away. This initiative allows us to reach even more people.

Around 4 million people in Australia need food relief at some point, that’s 20% of the population. To me, that’s outrageous. We urgently need a solution. Education is the key to ending hunger. That’s why we don’t just want to keep providing food. We decided to grow our education pillar. We now have five different programmes affecting everyone from individuals to corporate.

We received an invitation to host a meeting with the Minister of Environment and other members of the parliament. We prepared a meal for them using rescued food. That initial meeting ended in a tripartite commitment from the government to the UN sustainable development goal to half food waste by 2030. We now have around 10 years to reach the target and a long way to go.  Working with the government can be quite frustrating, a year went by since the commitment and nothing happened. Three more meetings later, the government re-committed to the target.

We worked with WRAP UK and offered our government and the minister of environment a plan to reach the SDG goal. We gave them a breakdown of all the associated costs it would take to get business and the government on board. It would come down to $30 million. They offered us 1.3 million Australian dollars, which is simply not enough.

Thanks to the partnership with Winnow, ForPurposeCo. is now able to promote and provide Winnow’s technology within the Australian and New Zealand hospitality sector. This initiative complements OzHarvest’s food rescue activity.