Think of a salad spinner. Except not the low-tech, plastic bowl we know, but instead, a culinary magician who turns usually trash-bound lettuce butts into the stars of your next dish – this is Dan Barber. Author of The Third Plate and featured chef on the first season of Netflix Docu-Series Chef’s Table. Here’s a look at his 5-week pop-up at Selfridges London, run entirely based around the concept of eating what’s usually deemed rubbish-worthy.

With a seat at one of the final wastED ( waste+education) tables, I had the chance to see the usable food we throw away each day artfully transformed into gourmet, melt-in-your-mouth pieces of heaven with a pinch of creativity and a dash of interest.

Each dish was presented by its cook, who gave us insight into where the ingredients were sourced from and how the final dish was prepared. In terms of drinks, our bartender noted that cocktail bars are ‘eyewateringly wasteful’, especially with citrus, which is why it was a challenging treat for him to come up with the inventive cocktails featuring sources like Chase Distillery at the wastED bar. The sommelier, on the other hand, told us that in the wine industry, waste is fairly under control, which is why they chose to serve wine from the least wasteful vineyards.

But let’s get to the meat of it. In addition to possibly simultaneously disgusting you with thoughts of stale bread and blue-ing cheddar, making you jealous of the magical bites eaten, and amazing you with the creativity of these chefs, I hope the elaboration on the menu below also highlights, once more, the prevalence of food waste. The partnerships formed with wastED to bring this venture to fruition, such as with Tesco, E5 Bakehouse, Welsh salt company Halen Môn and downstairs at the Selfridges Foodhall, to name a few, clearly showcased the importance many companies place on waste reduction. Though in many cases these companies were already composting food and taking other responsible steps towards reducing waste, wastED gave them the opportunity to see that there are also more profitable, and less taxing on the environment, ways to do so. wastED gave these food industry firms the opportunity to clearly see the monetary value of selling on what they had previously categorised as rubbish.

Both Dan Barber and Adam Kaye have lauded the waste-consciousness of Britain, as compared to other countries. But what does this mean for restaurants who don’t have 5 week publicity pop-ups during which they can drum up interest based on what some might see as a fad? I had the chance to speak briefly with Adam, who noted that the food waste prevention techniques used in the regular Blue Hill kitchen are often good planning and creative usage of what’s on hand. In their world, this means what’s in season, as they are a classic farm-to-table operation. He noted that the difference between wastED menus and those at a regular Blue Hill service was just that they didn’t necessarily make a habit of calling out ‘kale tree stems’ or ‘sardine bones’ on the menu. But at wastED, calling it out on the menu was the exact value proposition people came to partake of.

Nevertheless, in the daily grind for other restaurants and institutional kitchens, there are plenty of steps we can take towards not only taking better care of our planet and our people, but our bottom lines as well. As many have surpassed the first two steps of awareness of the problem and gaining knowledge on ways to combat it, the technological tools we can utilize are becoming more important. From Winnow scales to get preventable wastage of food and costs under control, to Bump Mark “a bio-reactive food expiry labelling material that responds to decay at the same rate as the food and changes texture as a signalling method”, developed and developing ideas are available, just waiting to be implemented.

If you’re interested in the details of the meal, let me transport you…a crowd awaited around the dedicated wastED elevator doors in the cosmetics hall of Selfridges. As the clock struck noon, those doors slid open and we were welcomed onboard to ascend straight to the rooftop.

There, I was greeted by a bright, well-decorated (and consistent with the theme), educational space: 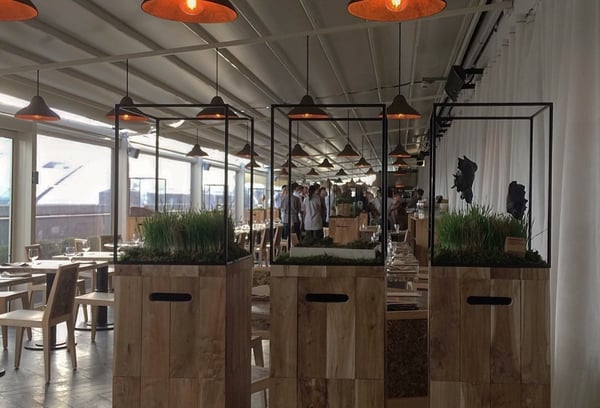 and then escorted to a table, where we began our 6-course waste-full meal… 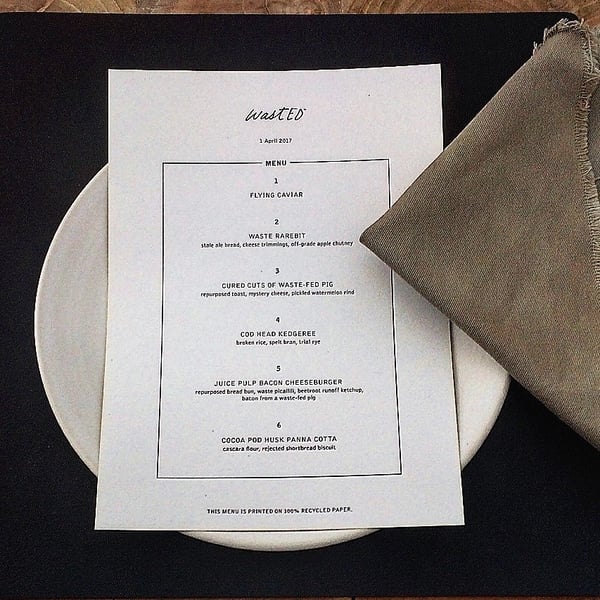 Sourced from Britain’s oldest smokehose, H. Forman and Son, the base of our 1st dish was the fin of salmon collar. After it was deep-fried, it was topped with caviar sourced from just beneath us, in the Selfridges’ dining hall. How, you may ask, did caviar get into our dishes?? As is well-known these days, ‘ugly food’ often doesn’t make the cut. These roe get thrown out because they aren’t quite as aesthetically pleasing as their perfectly round brethren. 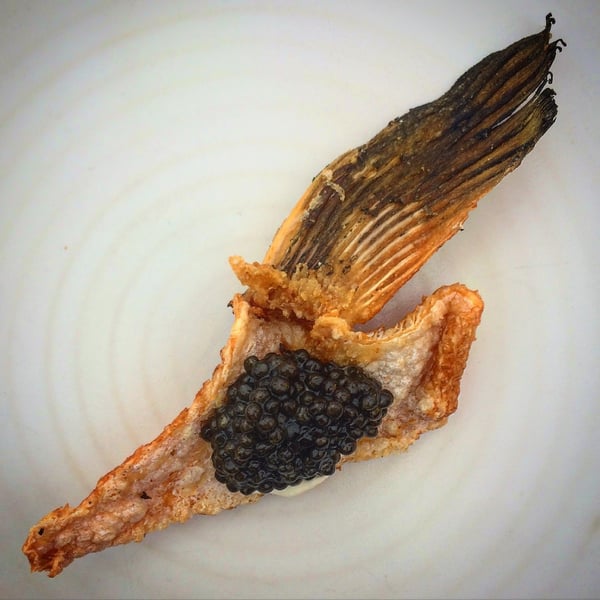 A play on the traditionally Welsh rarebit, wastED’s version featured stale ale bread, which was created using stale bread from E5 bakehouse (from where much of the baked goods were sourced) and stale beer from Beavertown. That beer was used in the cheese sauce too, which was made from cheese trimmings and to the side, we had ‘off-grade apple chutney’. To garnish, there were rapeseed leaves – and to be honest, this might have been my favourite bit! In the creation of rapeseed oil, the leaves are often tossed. But the robust flavour really complemented the cheesiness and I would gladly add these greens to my vegetable rotation. 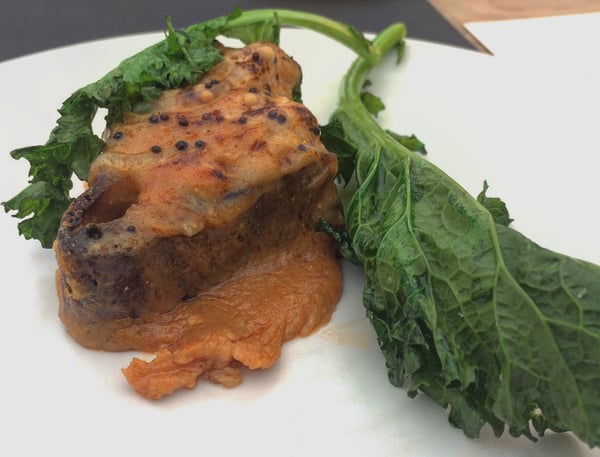 Served with reformed bread made from crushed dry E5 bread soaked in milk and re-baked, we had varied cutes from prize-winning, waste-fed pigs. Not an oxymoron. The loin, coppa, and fennel salami were all scrumptious, as was the head cheese. We were also reminded that the crusts (which were delicious) were important for our digestion and that our childhood days of crustless bread are part of the reason many of our peers have gluten allergies now – their bodies have thrown out the manual on how to digest and process that stuff.

Accompanying our waste-fed pig was blue-ing cheddar. Blue-ing cheddar, you say? Exactly, they say. Because cheddar isn’t a cheese renown for blue-ing, people are often not interested in buying (or selling) it. But the cheese mites that invade it, they told us as they presented it to us, just add flavour. And…they were right. The cheese went well with the cuts, and to top it off, we had pickled cucumbers and melon rinds leftover from Tesco’s 5-a-day cups, and butternut squash from wholegood, who use only the top and toss the rest. The combination of flavours in this seemingly simple dish were fantastic. 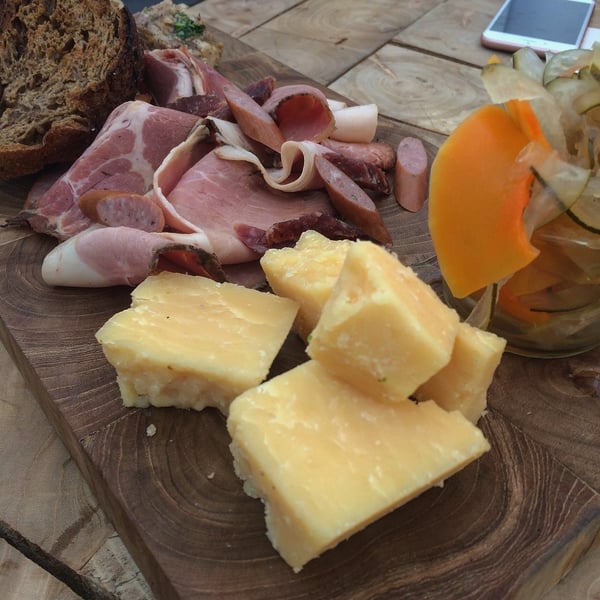 Wojciech Amaro presented us with the flavours of his native Poland in 4 forms. The burnt onion crackers filled with black pudding were my favourite. The crisp texture with the smooth paté-like black pudding within was so more-ish. We also had cannoli-looking pieces filled with boletus mushroom, herring and a crème fraiche emulsion, and cheese pierogis with sauerkraut. The ‘main dish’ of this course was beetroot-juice smoked cod cheeks cooked with melted beeswax and served with whey (from Borough Market’s popular kappacasein) and sorrel foam. The dressing included one of my favourite Eastern European flavours – sea buckthorn. 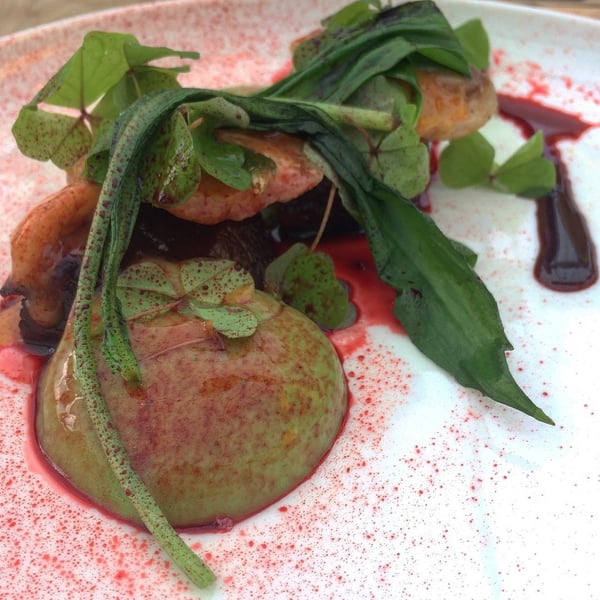 A popular dish throughout the run was the cod head kedgeree. In front of us sat a huge fish head, which we learned has a lot of tasty meat on it – especially under the eye socket. But it was the tongue that caught my eye, and encouraged by the adventurous eater to my left, I sampled some – a bit slimy? Yes. But still delicious, as it was cooked in the same way as the rest of the flesh. On the side, we had kedgeree, cooked with broken rice that is often trashed for its imperfect look. The creaminess of the risotto that also had curried yolks and crispy egg whites was not only scrumptious, but a perfect complement to the cod head. 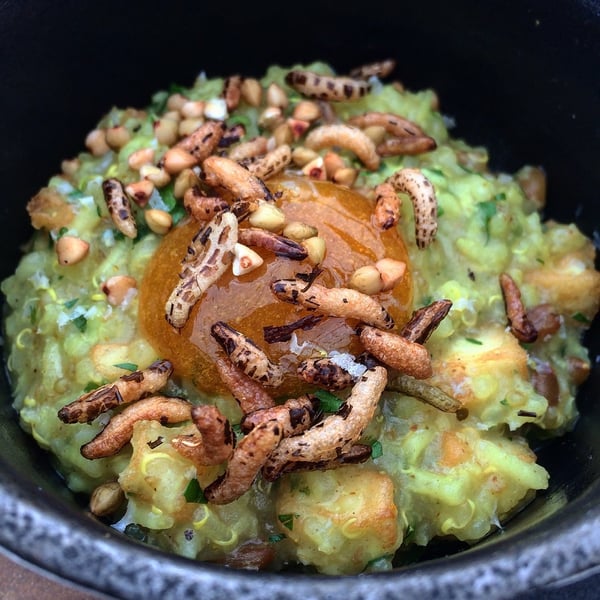 Dan served us one of wastED’s signature dishes, a staple from its first run in NYC. As you might guess, the suppliers of the ‘meat’ of this meal were some of the many juice bars that dot the Square Mile and beyond. The juice craze, popular on both sides of the pond, creates a lot of fruit and vegetable pulp waste. Not only does this actually rid the juice of many of the valuable nutrients, it degrades the hard-grown fruit and vegetable into by-product destined for the dump. Not so for wastED. They worked with juice bars across the city to collect the vegetable pulp and turned it into, honestly, the best non-meat (and only 100% vegetable juice pulp) burger I’ve ever tasted. And to make sure no one mistook it for a veggie burger, they threw in a slice of bacon, made from those waste-fed pigs, to top it off! Other accompaniments included cheese from Neal’s Yard Dairy, old buns mixed with yeast milk from E5, picallili and red beet ketchup sourced from more Tesco waste that had been reduced down with vinegar and salt. 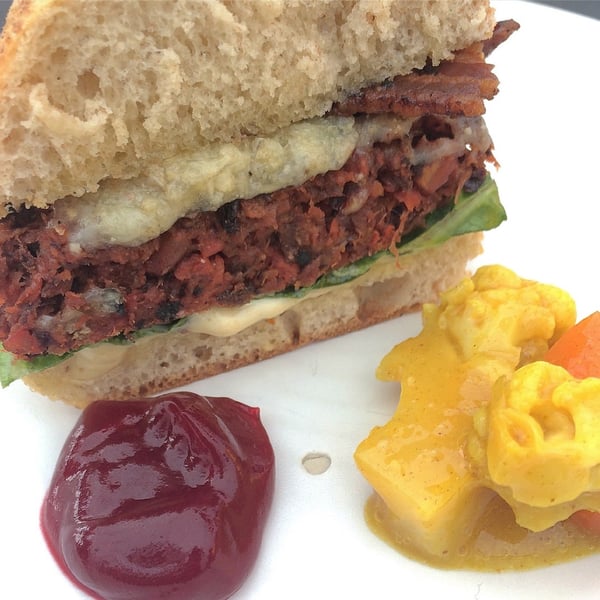 To lull us slowly into our food coma, intense, amazing-smelling roasted cocoa husks were brought out to accompany our dessert – they were just for smelling and it was heavenly, ending the meal on a more purposeful multi-sensory note. For our taste buds, there was Mast Brothers’ chocolate, infused with milk and cream, and served topped with cascara (coffee seed husks) and rejected Walkers shortbread. Smooth, sweet and a little bit crunchy, it was an amazing way to end an indulgent meal – as a reminder, completely made from what many consider to be daily trash. 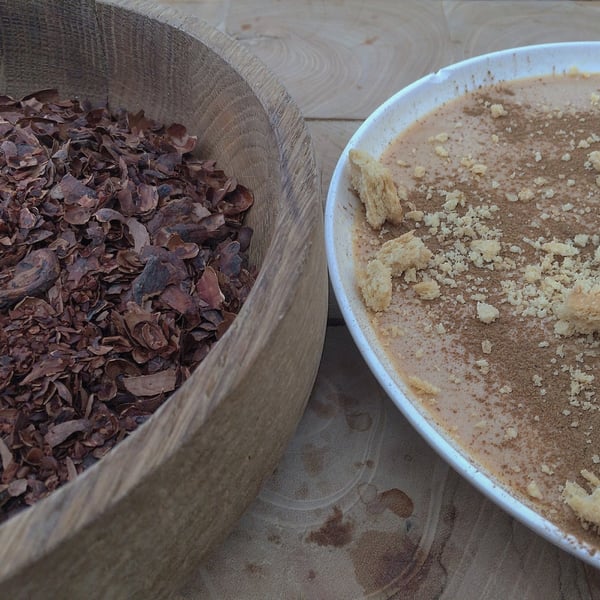